Sycamore School exists so that academically gifted children can experience the enriched, accelerated education they need to reach their potential and to lead responsible, constructive, fulfilling lives. 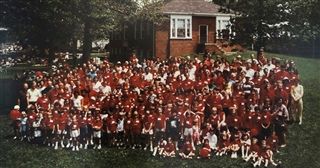 When a group of parents met in 1984, they sat around a kitchen table and talked about how they were not satisfied with the educational opportunities available in Indianapolis for children who were academically gifted. They decided that the best solution could be achieved through the creation of a private, independent institution, and thus, before the end of 1984, Sycamore School was chartered as a not-for-profit corporation in Indiana. Gene Eib, a highly regarded, recently retired public school principal, was hired as its founding Headmaster on Christmas Eve, 1984.

With Gene Eib’s leadership and credibility, plus boundless energy from the parents and teachers, feverish preparations were made during the 1984-85 school year. A building was leased from a Unitarian Church near Butler University and prepared for use by the new school. Teachers were hired, used furniture and a few instructional materials were gathered, and the school opened in the fall of 1985 with 110 students in kindergarten through grade five.

Enrollment expanded rapidly, and the young institution quickly outgrew the church’s available space. Portable facilities were rented, but it became obvious that a new location was needed. Board members pursued a lease on a vacant public school building. While these negotiations were going on, the Butler Preschool for Gifted and Talented Children, operating under the auspices of Butler University, was in the process of closing. Sycamore School completed its agreement with Washington Township to lease Grandview Elementary School just in time for a number of teachers and families from the Butler Preschool to join Sycamore in its new, much larger building.

Thus, in fall 1989, the school moved to the site it occupies today, serving students from three years of age through grade eight. It was then a 14-acre campus with a 56,000-square-foot building. The campus is now 16 acres, and the building has 200,000 square feet under roof. This one building houses all of the academic facilities: classrooms, science and computer labs, music and art studios, gymnasium, auditorium, and library. The grounds also contain athletic fields and play areas for younger children. 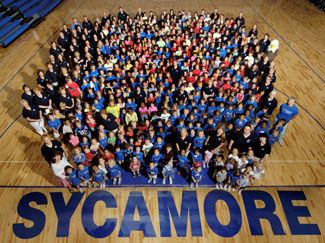 The school grew rapidly in enrollment, quality, and community recognition. In 1991, Sycamore became a provisional member of ISACS, the Independent Schools Association of the Central States. That school year also saw significant improvements in the library, which continues to be a priority, and the creation of an appropriately accelerated and differentiated math curriculum. The athletic program began substantial improvements the following year.

After Mr. Eib’s retirement in 1987, Alice Bostwick became Head of School. Mrs. Bostwick had been one of the school’s founding teachers. She was dedicated to the school and had boundless energy to devote to its success. When Mrs. Bostwick was appointed, the school had already outgrown its original building, and classes were being held in a collection of construction office trailers on the original campus. When Sycamore School moved to the present location, Alice played a major role in assisting with the actual move, in addition to planning for the use of the larger space. While Mrs. Bostwick was Head of School, enrollment grew to 385, nearly filling the building.

Bostwick was succeeded by Dr. Nyle Kardatzke, who became Head of School in January of 1994. That school year, the student body reached 400 in preschool through eighth grade, with over 50 faculty and administrators. Dr. Kardatzke’s previous experience in independent schools led to restructuring the administration to allow for Division Heads, a Plant Manager, and a full-time Admissions Director. Long-range planning in the spring of 1994 and subsequent work by the Board of Trustees set in motion activities to strengthen and improve the school. Much of the school’s history from 1994 to 2000 is a reflection of that long range plan, which led to the following developments:

Sycamore School: What does the future hold?

This is probably the most challenging question in education today. We are educating kids for an unknown future. That’s why teaching them to think, both critically and creatively, and teaching them to love learning are the best gifts we can give them. There are a few things I know about the future:
Diane Borgmann / Head of School / Sycamore School

A new long-range plan was written in 2000 with the participation of 70 parents, teachers, alumni, and students. This new plan called for further improvements in the facilities, upgraded faculty compensation, expanded financial aid, and steps to assure continuity of the school as staff and Board members change over time.

A second capital campaign in 2004-2005 provided a new gymnasium and a new theater, a relocated and modernized library, plus renovation of the Lower School wing and creation of a new entrance. The old building could scarcely be found amidst the beautiful new surroundings, and the ways students now learn at Sycamore School would not be recognized by those who occupied this building in the mid-20th Century.

Sycamore School’s 20th Anniversary in fall 2005 may have marked “the end of the beginning,” with newly expanded facilities, an outstanding record of student and alumni achievement, and a clear mission for the future. Members of the Sycamore community were ready to write the next chapters of the school’s history in the years ahead.

Dr. Kardatzke completed a highly successful tenure as head in June 2006. His legacy at Sycamore includes a commitment to continuous improvement, pastoral concern for all members of the school community, the embodiment of impeccable ethical standards, and a good-humored and gentle role model for students and adults alike.

The Board of Trustees of Sycamore School selected Leo P. Dressel to be the fourth Head of Sycamore School, effective July 2006. During his tenure at Sycamore, Mr. Dressel conducted a successful search for a new Head of Middle School. He helped the school develop and implement its first Crisis Response Plan. Active in the Indianapolis Area Private Schools Diversity Consortium, Mr. Dressel promoted diversity at all levels within the Sycamore community. During his second year at Sycamore, enrollment was at a record high of 432 students. He spent his last year at Sycamore guiding the school through the strategic planning process.

For the 2008-09 school year, Dr. Susan Karpicke and Mrs. Glenna Lykens were named as Interim Co-Heads of School as Sycamore embarked on a search for a new permanent Head of School. Dr. Karpicke, who is currently Director of Admissions, and Mrs. Lykens, who is Head of Lower School, continued in those roles as they worked with the administrative team to provide leadership until the new Head of School was in place.

In December 2008, Diane Borgmann was named the fifth Head of School at Sycamore, effective July 1, 2009. Mrs. Borgmann returns to the Sycamore community she had been an integral part of for eleven years. She was the first Head of Lower School at Sycamore beginning in July of 1994 and continued in that role until June of 2005, adding the additional responsibilities of Associate Head of School in 2001. She and her husband, Bob, have three sons who are Sycamore graduates. Her intimate knowledge of, and commitment to, gifted education made her a natural selection to lead Sycamore. Her knowledge and contacts in the gifted community are valuable assets in Sycamore’s work.

In 2015-16, Borgmann and the board oversaw the launch of an ambitious $5.7 million capital campaign.  The support from Sycamore friends and family was tremendous, and the school exceeded their goal by the end of the 2016-17 school year. The money raised was used for the construction of new spaces within the school, renovation of needed existing areas of the building, and growth of a financial aid endowment to benefit students who cannot afford to come to Sycamore, and continuation of the Sycamore Fund.


In 2017,  Patrick Cauley was hired as the Director of Technology, replacing longtime Director. Larry Fletcher.  The following year, the brick and wrought iron fence with the Sycamore School sign were completed as the final piece of the Fulfilling Promise Campaign.

In early 2019, Sycamore received word that its fourth ISACS accreditation had been successful and that they were also awarded “Top Workplace in Indianapolis” for the second time. The Early Childhood Outdoor Play Lab is completed in late 2019

in 2020, Duane Emery was hired as the Director of Enrollment Management to succeed Dr. Susan Karpicke.  Karpicke and an original teacher, Eileen Prince, retired together with a combined total of 67 year experience.

With COVID-19 ending in-person learning in March 2020, the Sycamore staff developed and implemented the first Distance Learning Plan due to the global pandemic. During the summer of 2020, the Re-Opening Sycamore Task Force developed extensive health and safety protocols and facility modifications that enabled the safe return to in-person learning in the fall of 2020.

In early 2022, Head of School, Diane Borgmann, announced her retirement, effective June, 2023.
Since Diane Borgmann’s appointment as head of school in 2009, much progress has been made on many fronts. The 2009-2014 Strategic Plan was completed, and a Strategic Plan for 2015-2018 has been created and implemented. Some of the most significant accomplishments from 2009-2021 have been:
Sycamore is strong and getting stronger as it continues to advance its reputation as the nationally recognized leader in the education of gifted children. As Mrs. Borgmann likes to say, “This is too good not to be better.”

Sycamore School was founded in 1985 by parents and teachers who felt that the unique needs of their high-achieving children were not being met by existing public and private schools. Discussions within this small group led to the suggestion that they start a school dedicated solely to the education of academically gifted students.
Indiana’s Only Accredited, Private, Independent Preschool - 8th Grade School for Gifted Students